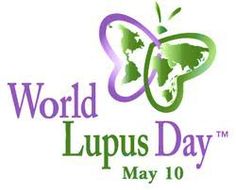 Today is World Lupus Awareness Day. I sometimes wonder if the proliferation of awareness days, weeks and months desensitize us, making us immune (no pun intended) to the message we are intended to receive.

While visiting last weekend, my mother saw tv sports commentators wearing green ribbons. She asked why they were wearing green ribbons? I replied for the Humboldt Bronchos hockey team. She knew that had been done, but was surprised they were still wearing those weeks after the accident. Having celiac disease, she commented that green ribbons are also worn for celiac awareness. I added my two cents: green is also for organ transplant awareness too. We are running out of colors, sadly not out of diseases or causes.

Since starting my blog, I’ve had the same thought while composing every post about Sjogren’s’s Syndrome – everyone who reads my blog knows about this already. But thanks to the world wide web, new readers continue to find me here and inevitably after each post a new reader e-mails me, or leaves a comment after a post saying they never heard of Sjogren’s before. Sometimes people thank me, because they have Sjogren’s themselves, or know someone who has it, or suspect that someone they know and love is suffering the symptoms but has yet been diagnosed. I am willing to gamble on reader fatigue if it means one more person in the world will become aware.

Beyond awareness, I hope my writing will also generate understanding. Awareness that a certain disease or cause exists is absolutely the first step. It is great to know today all over the world people will wear purple ribbons acknowledging it is World Lupus Day. I hope people ask the person wearing a ribbon why they are doing so; that they get a response creating an understanding of Lupus and its impact on the person wearing it, whether they are afflicted or wearing the ribbon for someone they know.

Several years ago my Rheumatologist believed I had Lupus, but as my symptoms evolved and blood tests were repeated over and over through the years, I was diagnosed with Sjogren’s Syndrome, Raynaud’s Syndrome, Autoimmune Hepatitis, and Undifferentiated Connective Tissue Disease (UCTD) “with multiple symptoms of Lupus and Dermatomyositis” instead.

Although I meet the criteria for Lupus based on the characteristics used for diagnosis, because it has not affected my brain, lungs, heart or kidneys, and I have not tested positive for the definitive antibodies anti-DNA, rather only the more general ANA, my current Rheumatologist does not want to say I have Lupus. Instead I was diagnosed with UCTD, which is basically a catch-all disease category (hence the word undifferentiated) for people with symptoms of several connective tissue autoimmune diseases including Lupus.

To do my part on World Lupus Awareness Day here are the diagnostic criteria for Lupus as per the Canadian and American Rheumatology and Lupus Associations. A person must have at least four of the eleven criteria on the list. If you currently have four or more of these, or have had in the past, there is a strong chance you have Lupus.

1. Malar rash – a rash over the cheeks and nose, often in the shape of a butterfly
2. Discoid rash – a rash that appears as red, raised, disk-shaped patches
3. Photosensitivity – a reaction to sun or light that causes a skin rash to appear or get worse
4. Oral ulcers – sores appearing in the mouth
5. Arthritis – joint pain and swelling of two or more joints in which the bones around the joints do not become destroyed
6. Serositis – inflammation of the lining around the lungs (pleuritis) or inflammation of the lining around the heart that causes chest pain which is worse with deep breathing (pericarditis)
7. Kidney disorder – persistent protein or cellular casts in the urine
8. Neurological disorder – seizures or psychosis
9. Blood disorder – anemia (low red blood cell count), leukopenia (low white blood cell count), lymphopenia (low level of specific white blood cells), or thrombocytopenia (low platelet count)
10. Immunologic disorder –anti-DNA or anti-Sm or positive antiphospholipid antibodies
11. Abnormal antinuclear antibody (ANA)

(In case you are curious, # 1, 3, 4, 6, 9, and 11 have applied to me. Because I am currently taking a chemotherapy immune-suppressant drug for the AI Hepatitis, most of those symptoms have been lessened by the same drug, which is a very good thing.)

Remember if you see someone wearing a purple ribbon today, maybe take a moment to acknowledge it. Be aware and even better, try to understand the complexity of Lupus.
It is not an easy disease to diagnose; it is just as difficult to live with. Be patient, be kind.

10 thoughts on “More awareness is never a bad thing.”

Always a pleasure to support local indie booksellers AND get a signed copy of a new release! Congratulations to @omar_aok on the release of “Praying to the West”. The endorsements of the book are strong. Knowing Omar’s writing/ journalistic style I have no doubt this is one of the must reads of the year. #indiebookstore #yegauthor #canadianwriter #nonfiction #newrelease #simonandschuster #book #bookstagrammer #booksbooksbooks #canadianmuslims #booklovers #praying
Book launch (5pm MST in Canada Thursday June 17th) for a poetry anthology that began in response to the Gomeshi trial. Here we are in the midst of Cdn military sexual misconduct allegations. We have to break the cycle. Let’s talk about it. Write about it. Trigger warning: content involves sexual assault & abuse which may be disturbing to some. @thedragonflycentre @hducarte #metoo❤️ #metoomovement #metoo #poetry #poetry community #poems #sexualassault #feminism
How lucky am I to have been given this stunning handcrafted bookmark by my generous, kind daughter in-law Stephanie @lake.life.prep xoxo And what makes this bookmark even more special is that it was made by a fabulous local Alberta young entrepreneur @moonlightcreationsbyscarlett #bookish #booklovers #bookmark #reader #book #Alberta #youngentrepreneur #localart
After 8 months, today I sat down to write a post on my blog, come hell or high water. I know I’m not the only one struggling with lack of creativity during covid. Read me at: www.wantonwordflirt.com Direct link is above. #creative #creativity #creativityeveryday #creativitymatters #creativityeveryday #creativityfound #blog #blogger #bloggerlife #bloggersofinstagram #writersofinstagram #write #writing #writer #inspiration #magic #procrastination
So excited to receive a fabulous Instagram giveaway prize from the talented @hducarte Her short story “Black Worm” was published in this Canadian anthology which will be perfect to curl up with in the cold, but cozy days ahead! Thanks so much Holly for the book & other beautiful little treasures. Congratulations on your published story alongside other amazing authors & poets. Follow Holly to keep an eye on her writing career & always gorgeous Instagram photos. #author #poet #canadiangirl #shortstory #winner #giveaway #writer #writerscommunity #publishedauthor #canada🇨🇦 #booklover #book #bookstagrammer #books #emergingwriters
Thanks @thegreatcanadianwoman blog for featuring my guest blog! #women #woman #canadian #blog #anxiety #misdiagnosis #health #medicine #depression # intuition #persistence
Never forget. Always acknowledge.
Sharing this beautiful Autumn post in celebration of @hducarte publishing her short story “Black Worm” in this anthology of amazing Canadian creatives. Congratulations Holly!
@thegreatcanadianwoman blog just went LIVE! Honoured to be one of the first writers to be published on this excellent new platform featuring a range of topics from health to finance to sex to everything in between. There is also a podcast that went live today too. Check it out! Thank you @thegreatcanadianwoman for the opportunity to tell my story of searching for a diagnosis & what has become my best medicine! https://www.thegreatcanadianwoman.ca/a-runaway-train-a-diagnosis-and-my-best-medicine/ #Canada #canada🇨🇦 #woman #womanpower #womanempowerment #womenwriting #womanblogger #new #newblog #newbloggers #newblogpost #newplatform #health #healthwriters #finance #sex #women #writing #blog #medicine #writingcommunity #writing #writingcommunityofig #writersofig #canadianwriters #canadianwriter #canadianwritersgroup

My Tweets
The UnDad