Today is World Sjogren’s Day. Set aside to honor the birthday of Dr. Henrik Sjogren, who discovered Sjogren’s Syndrome, it is also a day to recognize the millions of Sjogren’s patients worldwide and create awareness of the often misdiagnosed / under diagnosed autoimmune connective tissue disease.

The main triad of symptoms that plague those, including myself, with Sjogren’s are: dryness, joint / muscle pain, and fatigue. The fatigue of Sjogren’s has been studied and found to equal that of MS.

A few months ago I attended a session with a motivational speaker who is promoting a book she authored detailing her personal experiences with low self-esteem, self-shaming, body image insecurity, and infertility. If all that was not enough, she also has a rare autoimmune disease affecting her lungs which required hospitalization in the past. The young mother is a passionate, energetic firecracker devoted to spreading her message of self-love and acceptance to women everywhere. She wants women to “embrace their flaws, own their awesome, breathe fire, and be world changers”.

As I sat listening to her impassioned message I was in awe of her enthusiasm. She speaks her truth unapologetically. After we applauded her, she opened the floor to questions or comments. I told her I thought she was delivering a powerful, needed message but personally I was just “too tired to be a world-changer”.

Her response to me was surprising. “Are you are hiding behind the mask of fatigue?”

What I wanted to say in that moment was “No, I am just truly f***ing tired.”

I wanted to tell her that my fatigue was no more a mask than her infertility was. It is not a choice. It is not something I can turn on and off, I don’t use it as an excuse, rather it is a truth. I did not share those thoughts aloud. I was also having the overwhelming thought that perhaps expecting all women to be world-changers might leave some feeling yet again “not enough”.

I sat there as she continued answering audience questions, stewing over my own thoughts and insecurities. Why was I reacting so strongly to her question? Was it because I was hiding behind a mask of fatigue; did being exhausted gave me any sort of personal pay-off, gains of attention, anything positive in any way? I believe the answer was, and is, no.

(Well, okay, it does give me something to blog about, but that’s all.)

In April I had to have a “level one sleep study”, the kind you have as an inpatient spending the night in a sleep lab hooked up to wires, sensors, recorders, and so on. Literally the sleep technician covers you from head to foot with equipment monitoring your pulmonary, cardiac, and neurological functions as you sleep. Decked out in all the medical technology paraphernalia I wondered how I could possibly sleep. 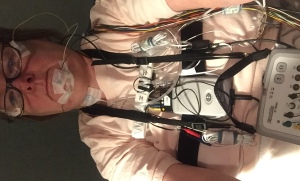 (Partially rigged up for the sleep study, more stuff to to be added, including in nostrils!)

Adding to the ambience, the room was seemingly airless except for the fan whirring in the corner. The bed was a typical hospital bed complete with vinyl mattress cover and pancake flat plastic covered pillow. Adding to the whole experience is the reminder that upon entering your room you stripped all your clothes off, except your underwear, to be enclosed in Rubbermaid containers as there had been previous bedbug infestations in the lab. And, if all of the above was not enough reason to provoke sleeplessness, the ceiling mounted camera capturing your every moment throughout the night becomes activated, the red “on” light glowing intrusively. The technician shortly thereafter announcing over a speaker in your room: “the study has begun”.

I wondered how valid these sleep studies could be; was it possible people actual slept under these conditions? As always, I was tired. I closed my eyes and hoped for the best. I did not want to have to do this again, ever.

Last week, I finally had the appointment to review the sleep study results with the pulmonary specialist who ordered the test. Good news was I do not have sleep apnea, which had been his main concern, thinking perhaps it was provoking my random intermittent episodes of atrial fibrillation heart arrhythmia.

I asked if there were any other significant findings. He said it was all quite normal, or in medical terms “unremarkable” except for one thing -I had slept 94% of the time.
Highly unusual he explained, for anyone to sleep that percentage of the time during a sleep lab study.

“You must have been extremely sleep deprived before the study”, he pronounced. It was a statement, not a question.

I’ve been tired since 1990. I could sleep anywhere, anytime is what I always tell people. Now I have the study to prove it.

For those who would like to know more about Fatigue and Sjogren’s: http://info.sjogrens.org/conquering-sjogrens/bid/342548/13-types-of-sjogren-s-fatigue

5 thoughts on “In honor of World Sjogren’s Day, allow me to say: I’m really f***ing tired!”

My Tweets
The UnDad