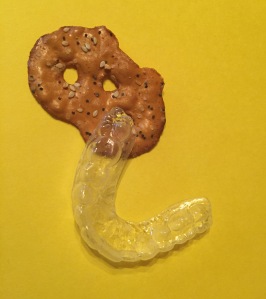 Last week, I did actually have a dry mouth incident that left both Mr. Wanton and I in hysterical laughter. (If you are my mother, you should stop reading right here.) I had been to the dentist and on Friday afternoon (several hours after dental office had closed for the weekend) I put my night mouth guard on just because I was thinking about wearing it again (I hadn’t for quite awhile). 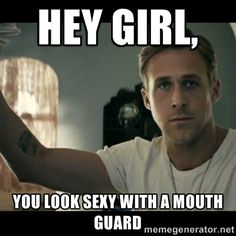 (No, Mr. Wanton did not say that to me. It would have been nice if he had though.)

Anyway, I popped it on my upper teeth. It was a bit snug but still comfortable enough. Then, I went to remove it but it wouldn’t budge. I recalled it always being a bit difficult, so I didn’t panic. Working at the edge again with my finger, I realized how dry my mouth was. I kept pulling at it, trying different locations along my upper gum line and teeth. My mouth and teeth were dry, so I started to panic a little thinking there was no lubrication between the teeth and the guard to help slide it off.

After trying to pry it off for over half an hour, I went to Mr. Wanton in the other room, and said through near tears: “I know this is ridiculous. F*** my life. What bloody next? I got my mouth guard stuck on my teeth and I cannot get it off, it’s Friday and I am going to be stuck like this until Monday when the dental office opens!”

He started to laugh, hard. I was furious at him for laughing at me, but I also realized the ridiculousness of my predicament and I started to laugh uncontrollably as well. Every time I started to say something, we’d both start laughing again. When we finally recovered, he said: “I can drive you to Dr. S’s house to get it off.” Our dentist is a “neighbour” about five miles down the country road. I said “No, I’m sure he doesn’t have dental tools at home.”

Then I saw a light bulb go on over Mr. Wanton’s head. He pulled a kitchen drawer open and took out a butter knife. Holding the knife in the air, he stepped toward me saying: “Here, I’ll do it”. Once again I burst into uncontrollable nervous laughter, but through it I managed to say: “No way, you might break my teeth! I’ll stay like this until Monday.”

(Even though I admit by then the mouth guard was feeling too tight, hurting my gums a bit, and I’m not sure if it was the stress, maniacal laughter, or the mouth guard, but I could feel a headache coming on. I knew there was no way I could possibly keep it on until Monday.)

So, Mr. Wanton said, “Fine then” and wandered off shaking his head. I went into our bedroom, sat on the bed and pried at that thing until finally I felt a glimmer of hope as over a gold crown covered tooth it finally budged enough for me to get a bit of leverage on it. Then with one desperate yank, it came off completely. Perhaps it was smoother there, or not quite as close a fit in that spot. Whew. I threw the mouth guard in the garbage.

The very next day, I took a bite of a pretzel chip, a new product I bought to try, biting it in two. The piece I bit off went to the roof of my mouth and got stuck on my palette, literally lodged there instantly. Like the previous day, I walked over to Mr. Wanton and said: “Would you believe I just got half a pretzel chip stuck on the roof of my mouth?” He started laughing, again. No matter how hard I pushed on it with my tongue it wouldn’t move. I tried water, nothing happened. He said: “Just pull it off!” I said: “Can’t you see I’m trying!” Finally after several attempts I managed to stick my finger on it, getting under an edge and dislodging it. I am now sworn off pretzels and mouth guards…for life.

(I do realize the meme says “pretzel’s” and it SHOULD be “pretzels”….either way you spell it, right or wrong, the pretzels did make me grumpy…..AND anxious.)

Midnight sun. 🧡 Celebrating the Summer Solstice and National Indigenous Peoples Day! #Alberta #canada #indigenouspeoplesday #summersolstice #midnightsun #canada🇨🇦 #summer #midnight #summer #lifeinthenorth #firstdayofsummer #photography #photooftheday
So, what do you hide from the world? New blog post up! www.wantonwordflirt.com #chronicillness #chronic #invisibleillness #health #wellness #healing #Sjogrens #docs #physician #writing #life #blog #art #create #write #transform #repress #express #creator #well #sick #healthhumanities #medicine
Help is available in Alberta #bellletstalk
Always a pleasure to support local indie booksellers AND get a signed copy of a new release! Congratulations to @omar_aok on the release of “Praying to the West”. The endorsements of the book are strong. Knowing Omar’s writing/ journalistic style I have no doubt this is one of the must reads of the year. #indiebookstore #yegauthor #canadianwriter #nonfiction #newrelease #simonandschuster #book #bookstagrammer #booksbooksbooks #canadianmuslims #booklovers #praying
Book launch (5pm MST in Canada Thursday June 17th) for a poetry anthology that began in response to the Gomeshi trial. Here we are in the midst of Cdn military sexual misconduct allegations. We have to break the cycle. Let’s talk about it. Write about it. Trigger warning: content involves sexual assault & abuse which may be disturbing to some. @thedragonflycentre @hducarte #metoo❤️ #metoomovement #metoo #poetry #poetry community #poems #sexualassault #feminism
How lucky am I to have been given this stunning handcrafted bookmark by my generous, kind daughter in-law Stephanie @lake.life.prep xoxo And what makes this bookmark even more special is that it was made by a fabulous local Alberta young entrepreneur @moonlightcreationsbyscarlett #bookish #booklovers #bookmark #reader #book #Alberta #youngentrepreneur #localart
After 8 months, today I sat down to write a post on my blog, come hell or high water. I know I’m not the only one struggling with lack of creativity during covid. Read me at: www.wantonwordflirt.com Direct link is above. #creative #creativity #creativityeveryday #creativitymatters #creativityeveryday #creativityfound #blog #blogger #bloggerlife #bloggersofinstagram #writersofinstagram #write #writing #writer #inspiration #magic #procrastination
So excited to receive a fabulous Instagram giveaway prize from the talented @hducarte Her short story “Black Worm” was published in this Canadian anthology which will be perfect to curl up with in the cold, but cozy days ahead! Thanks so much Holly for the book & other beautiful little treasures. Congratulations on your published story alongside other amazing authors & poets. Follow Holly to keep an eye on her writing career & always gorgeous Instagram photos. #author #poet #canadiangirl #shortstory #winner #giveaway #writer #writerscommunity #publishedauthor #canada🇨🇦 #booklover #book #bookstagrammer #books #emergingwriters

Award-winning writer and visual artist based in Edmonton, Alberta